SEOUL, July 5 (Yonhap) -- South Korea's current account surplus jumped to an eight-month high in May thanks to a sharp increase in the goods account surplus and stakes in overseas investment, central bank data showed Thursday.

The country's current account surplus came to US$8.68 billion in May, up from a surplus of $5.84 billion a year ago, according to the preliminary data from the Bank of Korea (BOK). From a month earlier, the May figure shot up from $1.77 billion tallied in April.

It is the largest monthly figure since September last year when the current account surplus reached $12.3 billion.

It also marked the 75th consecutive month that Asia's fourth-largest economy has maintained a current account surplus, which started in March 2012.

The goods account surplus widened to a six-month high of $11.39 billion in May from $5.84 a year earlier as rising global demand for semiconductors buoyed South Korea's overseas sales.

But it was offset by a $1.34 billion deficit in the travel account as the number of departures outpaced the number of arrivals in the spring season.

The primary income account turned to a surplus of $22.8 million in May from a deficit of $5.86 billion in the previous month.

In the financial account, South Korea's direct investment hit $6.06 billion in May, lagging slightly behind an all-time high of $6.66 billion tallied in October 2010. Meanwhile, foreigners' holdings of local stocks increased for the third straight month to $3.01 billion in May on eased geopolitical risks.

For the first five months of the year, South Korea's current account surplus amounted to $22.27 billion, down from $28.72 billion a year earlier.

The service account, which involves travel and intellectual property accounts, saw its deficit broaden to $13.49 billion from $12.72 billion over the cited period. A loss in the primary income account for the January-May period also expanded on-year to $5.24 billion from $4.15 billion. 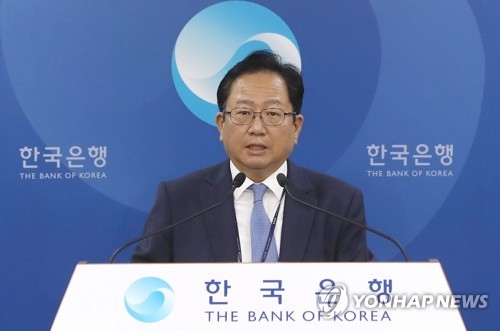