SEOUL, July 5 (Yonhap) -- Electricity demand is expected to rise to the highest level ever this summer as South Korea is forecast to have hot and humid weather, the energy ministry said Thursday.

The Ministry of Trade, Industry and Energy said it expects the nation's maximum power demand to spike to 88.3 million kilowatt (kW) this summer, which is up 4.4 percent from a year earlier.

The government expects that local power plants will have up to 100.7 million KW of combined capacity in the second and third weeks of August, the peak season of the year. The total capacity will permit a power reserve rate of 14 percent.

The ministry set the demand higher than last year as the weather agency is bracing for high temperatures and humidity across the nation, which usually causes more people to turn on their air conditioners and other electronic devices.

For a stable supply of electricity, the state-run Korea Power Exchange will implement the demand response system, which orders pre-registered companies to cut electricity use during peak times and provide compensation later, the ministry said. 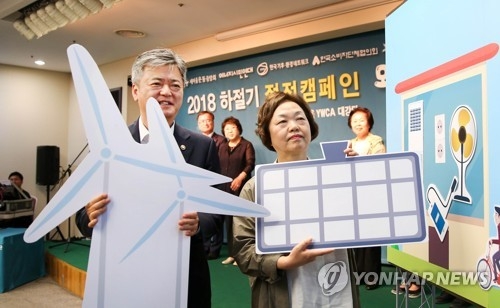