The average bank lending rate on new household loans stood at 3.75 percent in May, 0.09 percentage point higher than the interest charged on corporate loans, according to the data from the Bank of Korea (BOK).

May marks the third consecutive month that the bank lending rate on household loans has hovered above the borrowing cost for corporate customers.

The lending rate on household loans had usually remained below that on corporate lending till the middle of last year, but rate reversals took place a few times between then and March this year. 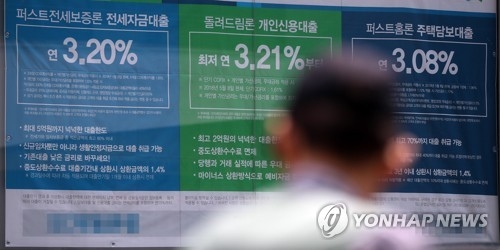 The rate reversal was attributed to an uptrend in market rates and the government's tougher restrictions on bank lending to the household sector.

"Banks usually extend short-term loans to corporate borrowers, while household loans are mostly long-dated," a BOK official said. "In a period of rising rates, the cost of long-term loans tends to increase by a wider margin."

Kim Cheon-gu of Hyundai Research Institute said the government's strengthening of regulations on household loans seems to have had an impact partially by making banks toughen their loan screening.