SEOUL, July 5 (Yonhap) -- An American right-hander leading all pitchers in wins topped the list of All-Star reserves in the Korea Baseball Organization (KBO) on Thursday.

Seth Frankoff of the Doosan Bears, who is 13-0 in his first KBO season, was one of 12 reserves for the Dream Team for the July 14 All-Star Game at Munsu Baseball Stadium in Ulsan, 400 kilometers southeast of Seoul.

Frankoff is also second in the league with a 2.70 ERA and 1.06 walks and hits per innings pitched (WHIP). The Bears, in first place at 54-26 through Wednesday, produced nine starters based on voting by fans and fellow players, and Frankoff was the only reserve. 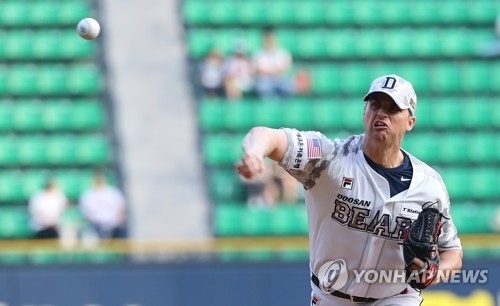 The Bears' manager Kim Tae-hyung will manage the Dream Team.

Headlining the Nanum squad is NC outfielder Na Sung-bum, selected to his sixth straight All-Star Game. Na, a career .315 hitter, is batting .321 with 14 homers and 51 RBIs in 83 games this year.

Na was one of three Dinos reserves, along with second baseman Park Min-woo and reliever Lee Min-ho.

Kia manager Kim Ki-tai will serve as the Nanum Team skipper. The Tigers had two reserves, as did the Twins and the Heroes. The Eagles, which had four players voted in, will also have three reserves.

Of the 24 reserves, 12 will be making their first All-Star Game appearances. Aside from Frankoff, there were two other foreign players: the Wyverns' right-hander Angel Sanchez and the Eagles' right-hander Keyvius Sampson.

Overall, the Bears have the most All-Stars with 10, followed by the Twins with eight and the Eagles with seven.