Choo kept the streak going with a towering solo home run to left-center field off Houston Astros starter Gerrit Cole in the bottom of the third inning at Globe Life Park in Arlington, Texas, on Wednesday (local time).

It was Choo's 16th home run of the season, the most he's had before the All-Star break in his career. Choo added a line drive single up the middle for good measure in the bottom fourth.

Choo owns the longest on-base streak in the majors this year and now has the longest such run by an Asian-born player in big league history, surpassing the 43-game streak set by Ichiro Suzuki for the Seattle Mariners in 2009.

The Rangers' franchise record for a single season is a 46-game streak set by Julio Franco in 1993. Choo is tied with Otis Nixon (1995) for the second-longest mark.

The Rangers' longest on-base streak at any point is held by Will Clark, who reached base in 58 consecutive games across 1995 and 1996 seasons.

Batting leadoff, Choo flied out to center in his first time up against Cole, a right-hander in the midst of a stellar season with a 9-2 record and a 2.50 ERA prior to this game.

But Choo got the better of him in the bottom third, sending a 96.1-mph four-seam fastball over the left-center field wall to put the Rangers ahead 2-0. It was measured at 443 feet.

Then in the fourth, Choo went down 0-2 in the count against Cole, before sending a hard line drive right past the pitcher for his second hit of the game.

That pitch was a 96.4-mph two-seamer. Prior to Wednesday, Choo was batting a robust .364 on fastballs measured at 96 mph or faster.

Choo was credited with a sacrifice bunt in the sixth inning. He laid one down back to pitcher Will Harris, who threw to third baseman Alex Bregman to get the lead runner out. But Bregman wasn't covering the bag, and he instead threw it back to first base to nab Choo, who missed a game last weekend with right thigh pains and wasn't running hard down the line.

Choo lined out to center field in the eighth in his final at-bat. 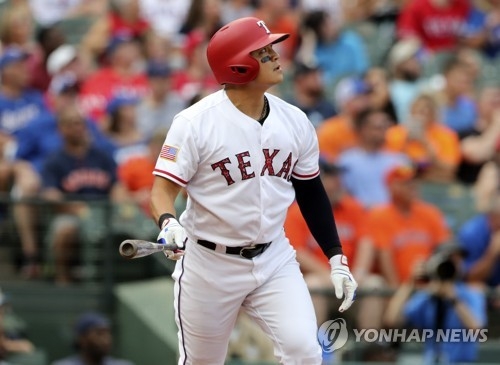