SEOUL, July 5 (Yonhap) -- South Korea's energy ministry said Thursday it will inspect solar power plants ahead of the rainy season amid rising concerns over their safety after a facility on a mountain collapsed amid heavy rain.

Solar panels on a mountain slope in Cheongdo County in North Gyeongsang Province, 325 kilometers southeast of Seoul, slid down the slope in the early hours of Tuesday following heavy rainfall the previous day. Trees, earth and sand also poured down onto a nearby two-lane road. There were no casualties.

The accident has raised concerns that cutting trees and mountain slopes to install solar panels could weaken the ground and cause landslides.

The Ministry of Trade, Industry and Energy said it will jointly conduct a safety review on mountain solar panels with the Korea Forest Service starting Friday, while encouraging 28,688 solar panel operators to check their facilities and report any signs of instability.

The number of solar facilities has sharply risen across the nation as the government has expanded subsidies for the renewable energy source under an energy transformation policy.

Over 3,000 solar panels have been installed in the first five months of this year, with 18.9 percent of them in mountainous regions, according to the ministry. 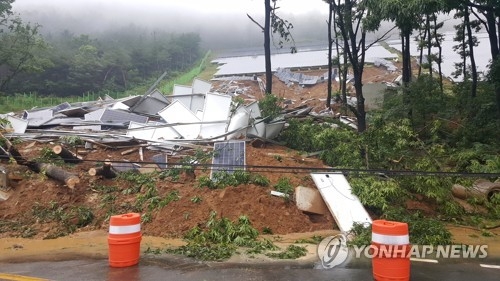