SEOUL, July 5 (Yonhap) -- Korean Air Chairman Cho Yang-ho appeared at a Seoul court Thursday for an arraignment session held to determine whether he should be arrested on embezzlement, tax evasion and other charges.

Prosecutors sought an arrest warrant for Cho on Monday over suspicion that he dodged over 50 billion won (US$45 million) worth of inheritance tax and embezzled some 20 billion won from company funds by unfairly awarding business contracts to companies controlled by his family.

Cho, 69, also faces breach of trust and other charges, such as pocketing ill-gotten profits from running an illegal pharmacy near a university with ties to his business empire, and paying lawyer fees for his family with company funds.

After arraigning Cho, the Seoul Central District Court is expected to decide whether to issue the warrant late Thursday or early Friday.

Cho's family has been in trouble following revelations that his wife and two daughters used physical and verbal violence against company staff and other people under their influence. His wife and the daughters have also undergone prosecution investigations. 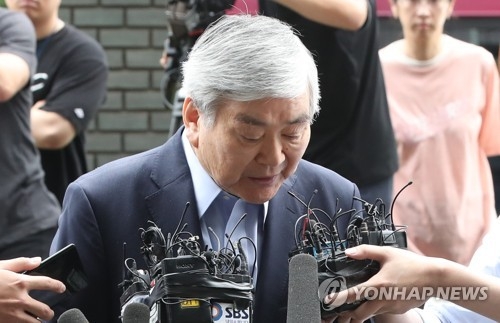