The total fertility rate -- the average number of children a woman bears in her lifetime -- is expected to fall below 1.0 in 2018, down from 1.05 a year earlier, said the Presidential Committee on Aging Society and Population Policy.

The figure is much lower than the replacement level of 2.1 that would keep South Korea's population stable at 51 million.

It also warned that the number of babies born could fall below 300,000 before 2022 if the current low birthrate persists.

On Thursday, the government unveiled a set of measures worth about 900 billion won (US$804 million) to boost the low birthrate.

One of the measures is designed to lessen women's burdens in childbirth and child rearing as a growing number of South Koreans have fewer babies, due mainly to financial constraints amid prolonged economic uncertainties.

Many South Korean women complain that their careers can suffer if they take time off for childbirth, as it is not easy for them to find jobs after spending an extended time away from work.

In 2015, South Korea's female participation rate in the workforce stood at 57.4 percent, compared with the average of 66.8 percent of member states of the Organization for Economic Cooperation and Development.

The government will also ensure parents who have children younger than 8 years old can take one hour per day off work for up to two years without a cut in their wages, according to the committee.

A country is classified as an "aged society" if people over 65 make up 14 percent of the population. If the numbers top 20 percent, the country is deemed a "super-aged society". 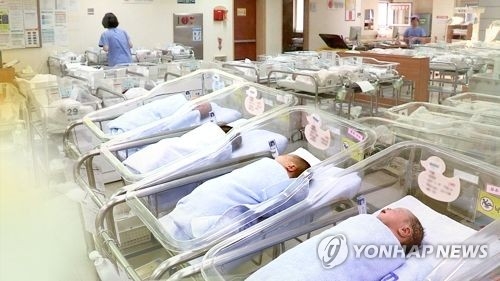 S. Korea's total fertility rate feared to fall below 1 in 2018

S. Korea's total fertility rate feared to fall below 1 in 2018