JOINT SECURITY AREA, South Korea, July 5 (Yonhap) -- The Vatican's top diplomat on Thursday voiced optimism for ongoing diplomacy to foster a lasting peace on the Korean Peninsula, saying "many good things" will be achieved despite challenges down the road.

Archbishop Paul Richard Gallagher, the Vatican's secretary for relations with states, delivered a message of hope for Koreans, as he toured the Joint Security Area (JSA) close to the heavily fortified inter-Korean border.

"Of course, it is a very historic period, a period of hope and the Holy Father is supporting that movement," Gallagher said in response to a question from Yonhap News Agency during the rare tour.

"We don't have any doubt that there will be many challenges and many difficulties ahead, but the determination that the Korean people have always shown in determining their future, I am sure with the prayers and support of Christians and other men and women in good faith around the world that many good things will be achieved in the coming months. We pray for that." 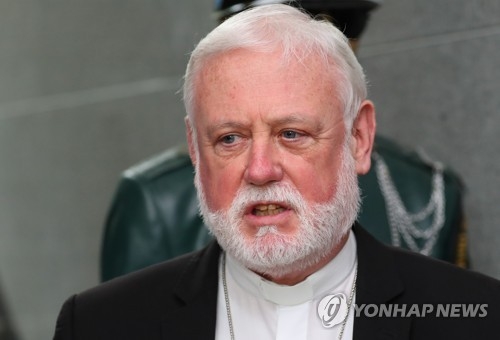 His tour of the world's last remaining vestige of the Cold War came amid brisk diplomacy by Seoul and Washington to persuade Pyongyang to renounce its nuclear ambitions and work together to build a solid peace regime after years of the communist state's provocations.

Asked to offer a separate message for North Koreans, the diplomat said, "Humanity has always got to move forward.

"We move forward, facing our challenges. Whatever side of the border we may be on, whatever situation we find ourselves in, we have to try and work for advancing the development of society," he said.

"I am sure that .... much good will come of everything that is happening throughout the Korean Peninsula and around ... with friendly countries and partners of Korea this time," he added.

In the JSA visitors' book, he voiced hopes that the border area will morph into a place for "hope and reconciliation."

"This is a rare honor to visit this place of such historic significance for Korea and for the world ... a site of division in the past," he wrote.

"I pray in the name of Pope Francis that in the future, it will be a place for hope and reconciliation," he added.

During the tour, Gallagher also visited the construction site for the Roman Catholic JSA Church, which is expected to be completed by March next year. The existing decades-old church will be closed when the construction is finished.

At the invitation of the South Korean government, Gallagher arrived in Seoul on Wednesday for a six-day trip, including talks with President Moon Jae-in, Foreign Minister Kang Kyung-wha and other top officials.

In 2014, Pope Francis appointed Gallagher the Vatican's first British foreign minister. He was previously the Holy See's ambassador to Guatemala and Australia. 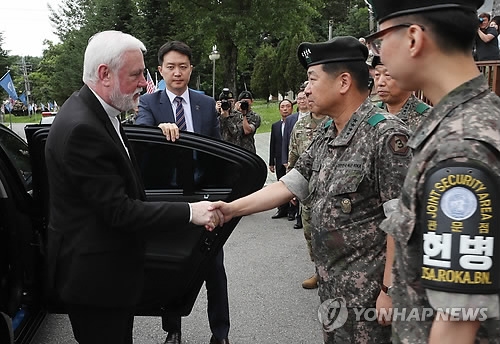