"I wish to take this opportunity to offer my respect and gratitude to His Holiness," Moon said while meeting with the Vatican's foreign minister, Archbishop Paul Gallagher, at his office Cheong Wa Dae in Seoul.

"The pope warmly consoled our people who were undergoing a great sorrow caused by the tragedy of Sewol ferry sinking during his visit to South Korea, and offered a message of peace and unity between South Korea and North Korea at every important chance, such as the PyeongChang Winter Olympic Games, the South-North Korea summit and the U.S.-North Korea summit," the president said.

"I am sure his continued support for our government's efforts have certainly been a great help to the success of the South-North Korea summit and the North Korea-U.S. summit," he added, according to Cheong Wa Dae pool reports.

The archbishop delivered personal greetings from the pope to the South Korean president and his people, along with an invitation from the pontiff for Moon to visit the Vatican in October. 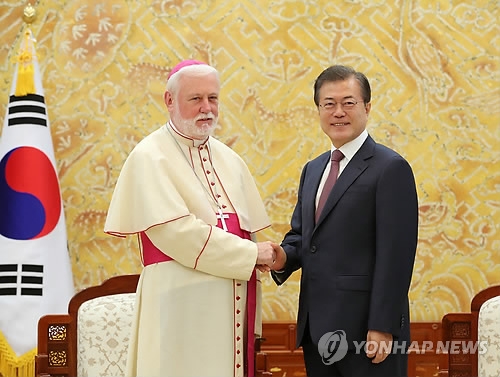