Park served his job on Wednesday in the mixed games of the inter-Korean basketball event at Ryugyong Chung Ju-yung Gymnasium in Pyongyang. With North Koreans singing songs and hitting balloon sticks, Park was the man with the mic to spice up the mood at the 12,000-seat gymnasium with his witty comments and explanations.

Park, who has 19 years of experience in the business, said he joined South Korea's delegation for the friendly basketball event at the last minute. He received the phone call from the Korea Basketball Association (KBA) around 7 p.m. Monday, just one day before the South Korean delegation's departure for the North Korean capital.

"I heard that the North sent a fax to the South around 6 p.m. Monday that it needs a stadium announcer," Park said to pool reporters. "I received the phone call later that I have to be in Pyongyang tomorrow."

For the match, Park said his urgent task was to understand North Korean basketball jargon. South Korea uses basketball terms that are the same as English, such as pass and rebounds, but North Korea has its own Korean-language terms for each maneuver.

"I was really nervous at the beginning because I wasn't used to North Korean terms," he said. "I was also cautious when saying North Korean players' names. There's a player named Kim Chong-il in the North, and I had to be careful when I pronounce his name."

Park, who works for South Korea's SK Knights basketball club in Seoul, said he also prepared 30 K-pop songs for the games but couldn't play the songs at North Korea's request.

"I feel great that North Koreans appeared to have enjoyed the game," he said. "Not many people can have this kind of opportunity. It's my family's honor." 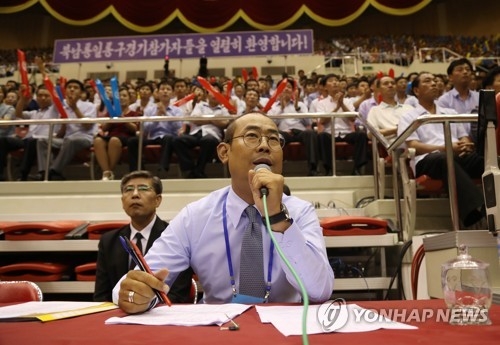