SEOUL, July 5 (Yonhap) -- South Koreans' favorable sentiment towards North Korea has hit an all-time high, following the North's successive summit talks with the South and the United States, according to a poll released Thursday.

The poll of 1,000 adults nationwide by the Asan Institute for Policy Studies measured the level of favorable impression of North Korea at 4.71 on a scale of 0 to 10, the highest figure since the survey was first conducted in 2010.

The survey, which was carried out by Research & Research on June 18-20 at the behest of the Seoul-based institute, has a margin of error of 3.1 percentage points and a 95 percent confidence level. 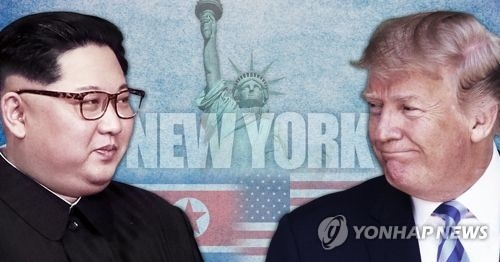 The level of South Koreans' favorable feelings towards the U.S., China and Japan stood at 5.97, 4.16 and 3.55, respectively, the Asan Institute noted.

It showed 62.6 percent of the respondents believing that the recent North Korea-U.S. summit agreements will be implemented well.

The institute also noted changes in the level of public trust towards Pyongyang.

In a 2013 survey, only 10.7 percent of South Koreans expressed trust for North Korea. In this year's poll, however, that number surged to 54 percent.