SEOUL, July 5 (Yonhap) -- The ruling and opposition parties said Thursday they will push for measures to improve transparency in the use of special activity funds amid criticism that the money has been spent without any oversight.

According to the People's Solidarity for Participatory Democracy (PSPD), one of South Korea's leading civic groups, the National Assembly provided ranking lawmakers, such as major party leaders and parliamentary committee chairs, with up to 60 million won (US$53,641) every month in the name of special activity funds.

But the money has been spent without any oversight or control because no receipts need to be turned in to prove it was properly used. Critics said the funds have been spent like a second salary for lawmakers, and it's a waste of taxpayer money and must be scrapped.

"It's difficult to say special activity funds are not necessary at all. There is an inevitable aspect for the operation of the National Assembly," said Rep. Hong Young-pyo, floor leader of the ruling Democratic Party. "We will improve the system in a way that discloses everything if possible."

The main opposition Liberty Korea Party also said it is in favor of disclosing where the money is used.

"We should make it a principle to disclose (everything). We should do this in a transparent manner so that people can understand it," said Rep. Yoon Young-seok, a spokesman of the LKP. "We should also review and adjust the size of special activity funds."

"When formulating the budget for next year, we should exclude special activity funds. As to the leftover funds in this year's budget, all parties should disclose every month where the money is used," said Rep. Roh Hoe-chan, the party's floor leader.

Roh plans to submit a bill calling for abolishing the parliamentary special funds. 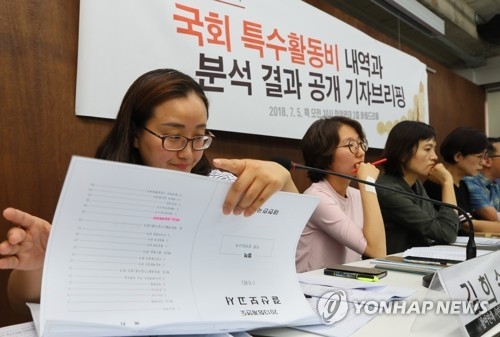 Ruling, opposition parties vow to improve transparency in use of special activity funds

Ruling, opposition parties vow to improve transparency in use of special activity funds