The authorities are also weighing options, such as doubling the length of the service period for "conscientious objectors" and having them lodge together in barracks in the areas of their assignments, according to the sources.

The move comes a week after the Constitutional Court ordered the revision of the conscription law to allow for alternative service by the end of next year, while upholding the criminalization of the conscientious objectors.

The court's nine-member bench ruled that a clause in the Military Service Act, which stipulates that such objectors face up to three years in prison, is constitutional, as it did in all of its three previous rulings, most recently in 2011.

"We have received a directive from Defense Minister Song (Young-moo) to complete the legal revision in the latter half of this year and enforce the alternative service from next year onward," a military source told Yonhap News Agency, declining to be named.

"The Ministry of National Defense, along with the Military Manpower Administration, plans to finish the legislation procedures within this year ... We are also preparing for public hearings to solicit public opinion over the introduction of the alternative service," the source added.

In line with the latest defense reform plan by the Moon Jae-in administration, which seeks to shorten the Army service period to 18 months, observers said that the military could consider setting the period for objectors at 36 months.

"The alternative service must be lengthier and harder so as to prevent the program from being abused as a means to avoid active-duty service," a senior ministry official told Yonhap on condition of anonymity. 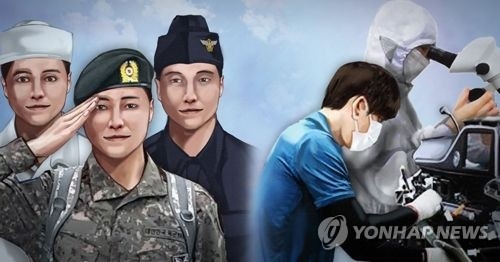