South Korea ended up in Group E with these three countries in a draw held in Jakarta, the host of the Aug. 18-Sept. 2 Asian Games, on Thursday.

There are six groups of four nations in the men's tournament. The top two nations from those six groups, plus the four best third-seeded teams will reach the round of 16.

Men's football in the Asian Games is open to players under 23, and teams are each permitted up to three players over the limit as "wild cards."

"I don't think there are any easy opponents for us," he said. "We'll play every game as if it were a gold medal match."

North Korea will be in Group F against Saudi Arabia, Iran and Myanmar.

The Asian Games' opening ceremony is Aug. 18, but the men's group stage will begin on Aug. 14, with the gold medal match scheduled for Sept. 1.

The South Korean women's team, which captured bronze four years ago, will face Indonesia, Taiwan and Maldives in Group A.

"Our goal is once again to win a medal," head coach Yoon Duk-yeo said. "We'll aim high as we prepare for the competition."

North Korea, which has won three of the past four gold medals, will take on China, Hong Kong and Tajikistan in Group B.

Group C only has three countries -- Japan, Vietnam and Thailand. The top three nations from Groups A and B and the top two from Group C will make up the quarterfinals. 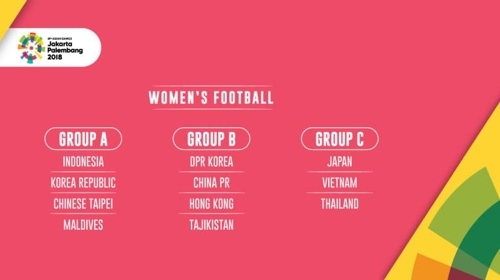