PYONGYANG/SEOUL, July 5 (Joint Press Corps-Yonhap) -- South Korean women's national basketball head coach Lee Moon-kyu said Thursday he has his eye on "a few players" from North Korea, as the two sides try to figure out a way to combine their teams for this year's Asian Games.

Lee got a first-hand look at North Korean national team players on Thursday in Pyongyang, when the Koreas met for a friendly match before a sellout crowd at the 12,000-seat Ryugyong Chung Ju-yung Gymnasium. It was part of a two-day exhibition series, as agreed to by the Koreas last month.

South Korea prevailed 81-74, but it was North Korean center Ro Suk-yong who led all scorers with 32 points. 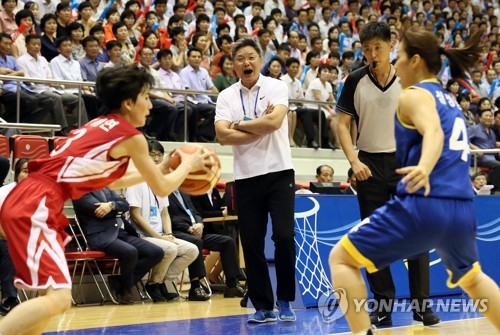 The Koreas agreed last Thursday to form a unified team in women's basketball at the Aug. 18-Sept. 2 Asian Games in Jakarta and Palembang, Indonesia. But there's still much uncertainty surrounding the project, as Lee noted, because officials haven't determined how many players from each side will be competing.

But the coach made sure he used this rare opportunity to get a closer look at North Korean players in action.

"The North Korean players competed hard. I think they could get some good results if they keep at it," Lee said. "Our players have only been together for 10 days, and so our cohesion is still lacking. Both teams battled hard in this game."

While Ro exploded for 32 points, Lee said the focus was on containing other perimeter players, guard Jang Mi-gyong and forward Ri Jong-ok. Lee also singled out those two players when evaluating North Korea.

"I think their quick shots could work well with South Korean players," Lee said. "We have to work on improving our on-court chemistry, and on shooting the ball with more confidence. We can have all the individual skills in the world, but we still have to play as a team to go up against China and Japan."

"Once we get together and start training, we should be a good team," said Park, who scored a dozen points. "It's an honor to play before such a huge crowd. Winning makes it that much sweeter." 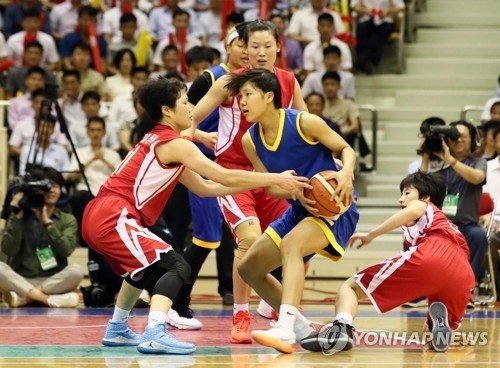 S. Korean coach has eye on 'a few players' for joint hoops team with N. Korea

S. Korean coach has eye on 'a few players' for joint hoops team with N. Korea