The draw was held on Thursday in Jakarta, a co-host city of the Aug. 18-Sept. 2 Asian Games along with Palembang.

The Korean team and the other four nations will be in Group X. The Group Y teams are China, Japan, Thailand, Hong Kong and Mongolia. This will be the first joint Korean basketball team in Asian Games history.

South Korea, ranked 16th in the world, won the gold medal at the previous Asian Games in 2014. Last Thursday, South Korea and North Korea agreed to compete as one this year, with the blessing of the Olympic Council of Asia (OCA).

This will be world No. 56 North Korea's first Asian Games appearance in women's basketball since 1990, when it finished fifth.

The two Koreans teams faced each other in a friendly match in Pyongyang earlier Thursday, with the South coming out on top 81-74. South Korean head coach Lee Moon-kyu said he kept a close eye on a few North Korean players who may make the joint team.

The OCA has said it won't grant extra roster spots for the joint team. And since South Korea is a superior side, this arrangement means some South Korean players on the bubble will be left off in favor of North Koreans.

It's not been determined how many North Koreans will be selected or whether there will be any stipulation on how many of them will have to play.

For the PyeongChang Winter Olympics in February this year, 12 North Korean players joined the South Korean team of 23. And the International Olympic Committee (IOC), which approved the joint team, required at least three North Koreans to dress in each game.

In men's basketball, defending champion South Korea will face Mongolia, Indonesia and Thailand in Group A. North Korea won't be in the competition. 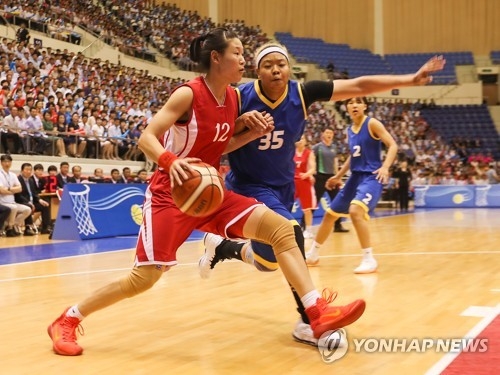