WASHINGTON/SEOUL, July 6 (Yonhap) -- U.S. Secretary of State Mike Pompeo began a trip to North Korea on Friday on a mission to map out details of the communist nation's "complete" denuclearization plan agreed to in the Singapore summit last month.

Landing at a Pyongyang airport, he was greeted by Kim Yong-chol, one of leader Kim Jong-un's top aides, according to foreign news reports. Several reporters are accompanying the secretary on his first trip there since President Donald Trump's talks with the North's leader in Singapore on June 12.

Pompeo plans to have a day and a half of meetings with the North's officials to follow up on the summit deal, which calls for improved bilateral relations and the complete denuclearization of Korea. It will be his first overnight stay in the North.

The United States hopes to maintain momentum amid news reports, based on U.S. intelligence sources, that the secretive North is continuing its nuclear activity.

"On this trip I'm seeking to fill in some details on those commitments and continue the momentum toward implementation of what the two leaders promised each other and the world," Pompeo was quoted as telling reporters during a brief stopover in Japan earlier in the day. 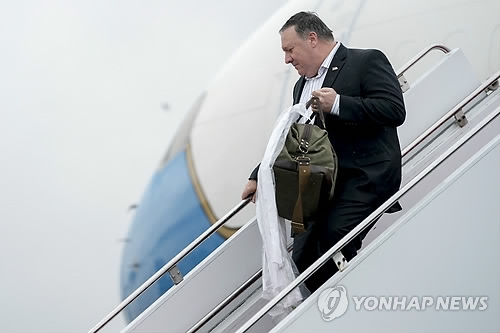 Among key issues are a timeline for the denuclearization process to start with a declaration of the North's nuclear arsenal followed by verification work. The U.S. wants significant progress within a year.

In possible pursuit of a more realistic goal, the Trump administration has started formally using the term "final, fully-verified dismantlement (FFVD)" of the North's nuclear program. It used to talk publicly about "complete, verifiable and irreversible denuclearization (CVID)," jargon which Pyongyang apparently loathes.

North Korea could also deliver the remains of some American soldiers killed in the 1950-53 Korean War on the occasion of Pompeo's visit.

Its results will be a major test of Pyongyang's commitment to the Singapore summit accord amid lingering skepticism.

Shortly after his trip to Pyongyang, Pompeo will fly to Tokyo for a trilateral meeting with his South Korean and Japanese counterparts -- Kang Kyung-wha and Taro Kono - this weekend.

(4th LD) Pompeo in Pyongyang to flesh out summit deal

(4th LD) Pompeo in Pyongyang to flesh out summit deal