Trump spoke to reporters aboard Air Force One en route to a Montana rally as U.S. Secretary of State Mike Pompeo was flying to Pyongyang to hammer out details of a nuclear disarmament deal struck by Trump and Kim last month.

"Under the Obama administration, they were launching missiles, they were testing," Trump said, according to a pool report. "They're not doing that anymore. That could start tomorrow. Who knows. And if it does, I won't be happy. But for eight months, there's been not one rocket or missile launch or there hasn't been a nuclear test." 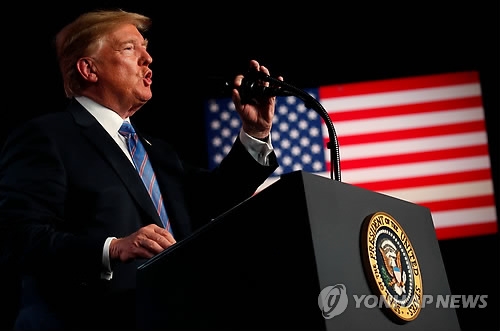 Trump appeared to take credit for the pause in testing, which followed a sharp escalation of tensions last year over North Korea's tests of intercontinental ballistic missiles and its sixth nuclear weapon.

He said he "got along very well" with Kim at their summit in Singapore last month. In return for "complete denuclearization of the Korean Peninsula," Trump committed to provide security guarantees to the North.

"I think we understand each other," the president said when asked if he trusts Kim. "I really believe that he sees a different future for North Korea. I hope that's true. If that's not true, we'll go back to the other way."

Trump did not elaborate on what the alternative would be, but last year he threatened to "totally destroy" the North while pushing a crippling international sanctions campaign against the regime.

Recent reports suggest the North continues to build up its nuclear and missile facilities despite the summit agreement. U.S. officials have also been quoted as accusing Pyongyang of trying to deceive Washington in order to extract concessions.