SEOUL, July 6 (Yonhap) -- The number of visitors to foreigners-only casinos in South Korea fell for a third year in 2017 due mainly to the fallout of a Sino-Korean row over a missile defense system, government data showed Friday.

The 16 casinos reserved for foreigners attracted 2.22 million visitors last year, down 6.2 percent from the previous year, according to the data from the Ministry of Culture, Sports and Tourism.

It marks the third consecutive year that the number of visitors to foreigners-only casinos has declined on an on-year basis.

The ministry attributed the on-year decrease to the diplomatic standoff between Seoul and Beijing over the deployment of a Terminal High Altitude Area Defense (THAAD) battery in southeastern South Korea.

In March last year, China banned the sale of package tours to South Korea and took other retaliatory measures against South Korean companies, insisting the missile shield poses a threat to its security. 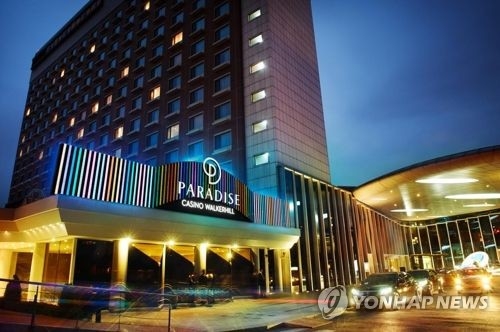 The move has led to a plunge in the number of Chinese tourists to South Korea, battering the local tourism industry and South Korean companies that have made forays into the world's second-largest economy.

According to the ministry tally, visitors to the foreigners-only casinos accounted for 16.6 percent of the total number of foreign tourists to South Korea last year, a turnaround from a 13.7 percent drop a year earlier and switching to an upturn for the first time in four years.

Foreign-currency revenue of those casinos came to US$1.07 billion last year, down 2.9 percent from the previous year. But the portion of the figure to South Korea's total foreign-currency tourism revenue rose on-year, recovering to the 8 percent level.

Kangwon Land Inc., which operates the sole casino reserved for South Koreans, posted the largest sales of 1.52 trillion won ($1.36 billion) last year among the country's 13 casino operators. The remaining casino operators, which cater only to foreigners, registered a combined turnover of 1.21 trillion won.

A ministry official said the number of visitors to the foreigners-only casinos has been on the rise this year as more Chinese visit South Korea.

In November last year, Seoul and Beijing agreed to put their bilateral ties back on track, setting aside the THAAD row. Since then, China has allowed group tours to South Korea, but Beijing still limits incentive and cruise tours to the neighboring country.
(END)

Visitors to foreign-only casinos dip in 2017 on THAAD fallout

Visitors to foreign-only casinos dip in 2017 on THAAD fallout