So far, South Korean companies have focused on such manufacturing sectors as autos, chemicals, electronics, steel and machinery, but their recent push represents a strategy of finding new growth engines in India with great growth potential.

Leading the pack are South Korean food companies and fruit growers, which are eager to discover new revenue sources in the fast-growing economy with a population of 1.3 billion, the world's second-largest after China.

Years earlier, South Korean instant noodle makers tried to make forays into the Indian market, but they fell by the wayside due to strict labeling rules and other regulations.

Ottogi, however, had carried out a thorough survey of Indians' tastes and the country's food laws since 2016, with its latest veggie ramyeon obtaining a certificate from the food safety regulator here. 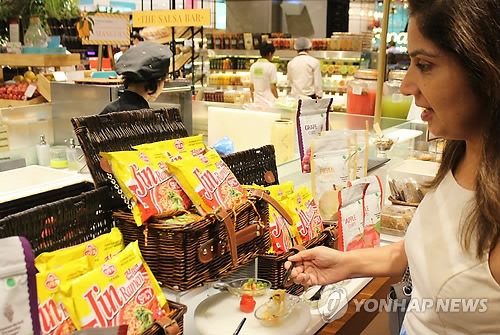 The veggie noodle product is currently on sale not only at large stores in New Delhi and Mumbai but also at restaurants frequented by Indians, according to Ottogi.

"India is expected to grow into an instant noodle market worth 1 trillion won ($890 million) by 2020. Initially, Ottogi aims to export 10 billion won worth of ramyeon to India by that year," a company official said.

Instant noodles are not the only product of note. South Korea has also recently succeeded in exporting pears to India.

According to the local daily Economic Times, the Indian government recently gave the go-ahead to imports of South Korean pears and other fruits. South Korean pears will be sold to consumers after being treated in low temperatures and fumigated.

"Pears will become the first South Korean fruit imported into India. The move will give more options to Indian consumers," a local food industry source said.

India imported $15.2 million worth of pears between April 2017 and February 2018, mainly from the United States, the Commonwealth of Independent States and South Africa. 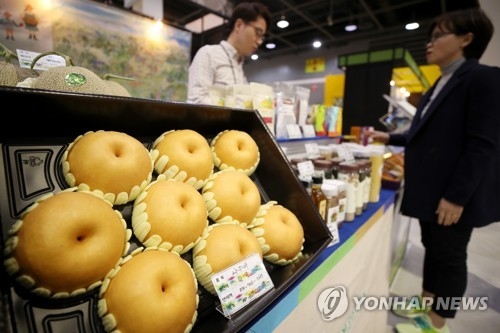 On top of South Korean foodmakers' push into the subcontinent, companies already operating in India are redoubling efforts to upgrade their businesses by exploring new areas and taking other measures, the New Delhi office of the Korea Trade-Investment Promotion Agency (KOTRA) said.

"Automakers are shifting their focus to electric cars, while manufacturers of electronics and electric goods are seeking localization of parts production in a departure from complete knock-down (CKD) kits," a KOTRA official said.

According to informed sources, shipbuilding and startups have emerged as promising industrial sectors as the Indian government has put forward a set of measures to boost those areas.

Despite India's support measures, South Korean companies are still confronted with a poor environment for corporate establishment and living in the country, they added.
(END)