SEOUL, July 6 (Yonhap) -- The South Korean government on Friday said a trade dispute between the United States and China will have a limited impact on the local economy in the short term but vowed to prepare for a wider, protracted war between the world's two biggest economies.

The Ministry of Trade, Industry and Energy convened a meeting with the state-run trade promotion agencies and industry associations to discuss the escalating trade tensions between Washington and Beijing, and its impact on the local economy, hours ahead of the tariffs going into effect.

U.S. tariffs on US$34 billion worth of Chinese imports kicked in starting Friday at midnight (local time) as President Donald Trump ramps up his "America First" policy. Shortly after the deadline, China's commerce ministry said it is "forced to make a necessary counterattack" to Washington's decision to slap tariffs.

The tit-for-tat tariffs have raised concerns that global economic growth will invariably take a hit and that other countries that ship goods with the two will feel the pinch going forward, including South Korea.

"The escalating trade dispute between China and the U.S., South Korea's big two trading partners, is adding uncertainties to the export-oriented Korean economy, sparking concerns among local exporters," Minister Paik Un-gyu said during the meeting. "The tariffs are expected to have a limited impact on the Korean exports in the short term, but we have to closely monitor possibilities of an intensifying trade dispute to minimize its impact on the local economy and companies." 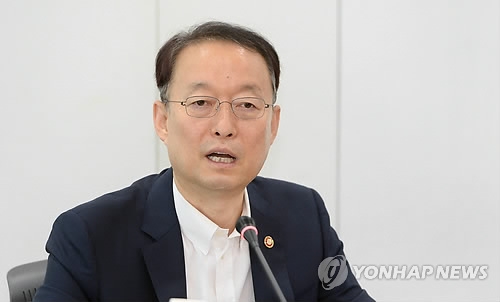 If Washington and Beijing actually levy US$50 billion of tariffs on a broad range of items from each other as they vowed, the Korea Institute for Industrial Economics & Trade (KIET), a state-run think tank, speculated that such a development will lead to a decrease in their trade volume and gross domestic product, which would in turn affect South Korean exports as well.

As a result, South Korea's exports of intermediary products to the two nations, especially of memory chips, chemical products and auto parts, will be hit by the fall in overall production for certain goods, the KIET said.

While the Seoul government claims the trade dispute will not be felt immediately by the local economy, the main concern is that the dispute could turn into a wider, protracted standoff with the two sides continuing to raise tariffs on thousands of additional products instead of negotiating a settlement

An analysis by Pictet Asset Management (PAM) in London showed that the fallout of a full-blown trade war will affect a number of countries that are tightly integrated into the global value chain, including South Korea, Taiwan, Singapore and Hungary.

According to PAM, South Korea ranked as the sixth most vulnerable country to the Sino-U.S. trade dispute, considering its exports of semiconductors, electrical machinery, cars and steel to the nations.

The two-way dispute, which has been brewing for months, has also weighed on the Korean stock market because it has added to uncertainty about global economic growth and corporate earnings.