SEOUL, July 6 (Yonhap) -- South Korean football prospect Paik Seung-ho should be ready for the Asian Games next month despite his recent hamstring injury, his father confirmed on Friday.

Professor Paik Il-young, who teaches in the department of physical education at Yonsei University in Seoul, denied an earlier report that the 21-year-old attacker was likely to miss the Aug. 18-Sept. 2 Asian Games with a left hamstring injury.

"Seung-ho suffered a minor injury during a scrimmage in Indonesia on June 19," the senior Paik said. "He returned home immediately for further tests, and the diagnosis was he'd be out of action for four weeks. He's already done two weeks of rehabbing, and he can do some light jogging. He'll be able to participate in the Asian Games." 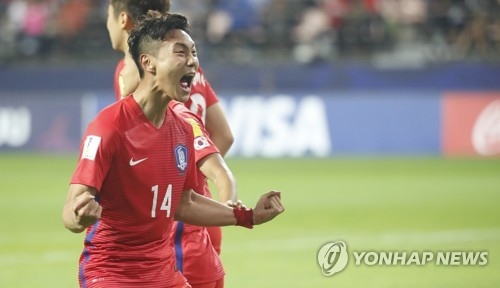 The men's football tournament in the Asian Games is open to players under 23, and Paik, an FC Barcelona youth product who spent this past season with the reserve team for La Liga's Girona FC, is considered a key piece.

Paik should be a shoo-in as long as he's healthy, and he will likely be joined by a couple of under-23 stars who competed at the FIFA World Cup in Russia last month: 20-year-old midfielder Lee Seung-woo, another former FC Barcelona prospect, and 22-year-old forward Hwang Hee-chan, already an accomplished pro with FC Red Bull Salzburg.

Each team is permitted to name up to three players over the age limit as "wild cards." Tottenham Hotspur attacker Son Heung-min, who turns 26 on Sunday, is likely to be one of the three over-age players.

South Korea won the 2014 Asian Games gold medal over North Korea in extra time. In this year's Asian Games, South Korea have been paired with Kyrgyzstan, Malaysia and Bahrain in Group E.

There are six groups of four nations in the men's tournament. The top two nations from those six groups, plus the four best third-seeded teams, will reach the round of 16.

The Asian Games' opening ceremony will be held on Aug. 18, but the men's group stage will begin on Aug. 14, with the gold medal match scheduled for Sept. 1.