SEOUL, July 6 (Yonhap) -- SK Shipping Co. has been in a legal battle with Samsung Heavy Industries Co. over an alleged defect in a liquefied natural gas carrier, an opposition lawmaker said Friday.

Kim Jung-hoon of the main opposition Liberty Korea Party said a problem with the dew point temperature in an inner barrier space of the carrier's cargo containment system was discovered when it arrived at the Sabine Pass LNG terminal in the United States, citing a report of the state-run Korea Gas Corp.

SK Shipping, the logistic service company of SK Group, refused to load LNG at the terminal due to a problem in the dew point, which caused it to remain idle for 75 days as of Friday.

On the other hand, Samsung Heavy, which built the carrier, claimed there was no problem in the performance and safety of the carrier's cargo containment system. 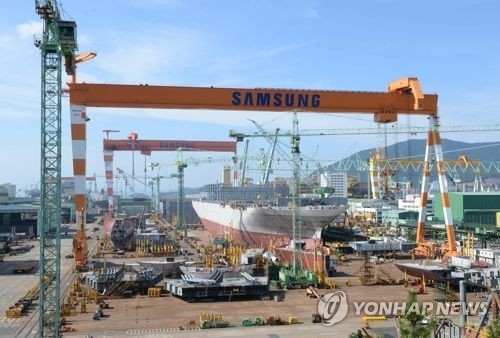