SEOUL, July 6 (Yonhap) -- South Korea said Friday the resumption of basketball diplomacy with the North this week has helped expand the two sides' sports exchanges and that such exchanges are also conducive to carrying out summit commitments.

The South's basketball players are scheduled to return home later in the day after a series of friendly games in Pyongyang.

The games were the first time that the two sides met on the basketball court in 15 years, a fruit of the April 27 inter-Korean summit deal, called the Panmunjom Declaration, on easing cross-border tensions and improving bilateral ties.

"It was a time that the South and the North, which became one through sports, were united again in Pyongyang," Lee Eugene, the unification ministry's deputy spokesperson, said at a press briefing.

The door for inter-Korean sports exchanges has been opened wide through the successful event in the North's capital and the implementation of the Panmunjom Declaration is expected to pick up speed, she added.

Lee confirmed that the two Koreas had "working-level consultations" on additional joint projects in Pyongyang starting late Thursday night after a basketball match and dinner. 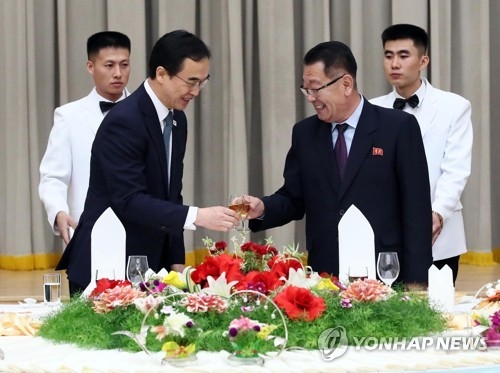 The South's Unification Minister Cho Myoung-gyon had a meeting with Kim Yong-chol, vice chairman of the Workers' Party's Central Committee, at Koryo Hotel Thursday morning, and Kim suggested the consultation on sports-related issues, Lee said. Formally, the unification ministry labeled the session as consultations or contact, not negotiations.

They discussed the North's participation in the Korean Open table tennis tournament to open in Daejeon, some 160 kilometers south of Seoul, on July 17 and the world shooting championships to be held in Changwon, South Gyeongsang Province, from Aug. 31.

Also on the agenda were a possible joint march at the opening ceremony of the upcoming Asian Games in Indonesia and the use of a unified flag, Lee said.

Lee stopped short of elaborating on the results of the discussions, saying the South's officials visiting the North are likely to have an opportunity to talk to media soon.

On Friday, the North's official Korea Central News Agency released a brief report on the basketball games but did not mention the sports talks.