"The final ruling will be made during a regular meeting set for July 18 as scheduled," an official of the Financial Services Commission (FSC) said.

If necessary, the regulator "would hold a preliminary session next week to take in closing arguments" from both the Financial Supervisory Service (FSS) and Samsung, according to another official.

In May, the FSS gave a preliminary notice to Samsung BioLogics that it broke accounting rules in 2015, an allegation strongly denied by the business entity.

After running losses for years, Samsung Biologics reported a net profit of 1.9 trillion won (US$1.72 billion) that year by changing the method of calculating the value of its affiliate, Samsung Bioepis.

Samsung BioLogics has claimed that the switch was in line with international accounting standards, while some civic groups and lawmakers have suspected that it may have inflated its profit to raise its value to benefit Samsung Group's heir apparent Lee Jae-yong, who held a major stake.

The regulator has asked the FSS to amend some measures it could take against Samsung BioLogics over the alleged breach, citing a need to look into a broader spectrum of fiscal records written between 2012 and 2014. Samsung Bioepis was established in 2012.

"The FSS was supposed to have presented the amendment during the previous review session this week, which would cause the FSC to take longer before making a final decision. But the watchdog did not put forth anything so far," the official added, without elaborating on details. 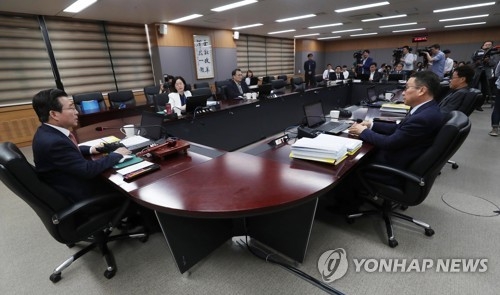 Regulator to make final ruling on Samsung BioLogics in mid-July

Regulator to make final ruling on Samsung BioLogics in mid-July