The latest rally follows two similar demonstrations held by staff at Asiana's bigger rival Korean Air Lines Co. in early May, at which they blamed the founding Cho family for years of habitual bullying and assaults on employees and others that have led to prosecution investigations.

The planned rally comes after some 110 flights run by South Korea's second-largest carrier took off this week without meals provided to passengers due to a delay in meal supplies that arose from problems with Asiana's new caterer.

But skepticism has remained among the employees leaving comments on their in-house online community site claiming that "burritos being served now are not the meals we offer."

The dress code for the protest will be any black outfit or Asiana uniform, the organizers said. They will also be wearing Guy Fawkes masks to hide their identities, following suits from previous Korean Air rallies.

Meanwhile, the transport ministry said Monday it will closely monitor the in-flight meal services until they are normalized and will look into Asiana's compensation programs for passengers who traveled without meals to see if the programs are reasonable or not. 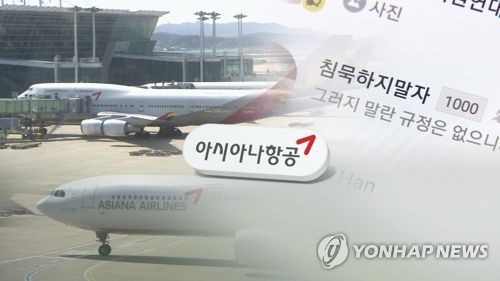