GANGJIN, South Korea, July 6 (Yonhap) -- Police said Friday the teenage girl found on a mountain days after she went missing was probably killed by her father's friend, whom she was going to meet for a job on the day she was seen last.

Announcing its preliminary outcome of its investigation, the Gangjin Police Station said the 51-year-old man, surnamed Kim, has become a suspect in the murder case. But police won't be seeking charges against Kim since he died shortly after the girl went missing.

The 16-year-old victim, whose identity is being withheld, was last seen on June 16 in her town in South Jeolla Province. She left home to meet Kim, who had offered to help her get a part-time job. She had kept the meeting with him secret from her family and only told her friend about the appointment.

After finding out where she had gone, her mother went to Kim's place to fetch her daughter. Kim told his family not to let her in and fled. He was later found hanged.

Police mobilized hundreds of officers and rescue dogs to search for the girl. Her naked body was discovered eight days after she was reported missing.

Quoting the toxicology result from the crime lab, police said Friday that the victim had traces of sleeping pills inside her system, with them suspecting Kim drugged her.

Her DNA was found inside Kim's car, along with his scythe and electric hair clippers, strengthening the case that she was killed by Kim, police added.

But police stopped short of making any conclusion over a suspected sexual assault of the victim. Police had said earlier the victim's body was too decomposed to determine the exact cause of death from an autopsy.

Police said they will continue their investigation until they nail down the exact details and motive of the murder. 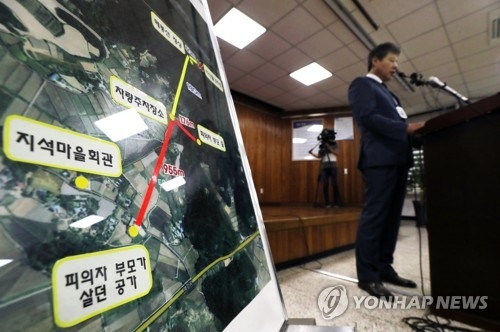 Police: Missing girl was likely murdered by her father's friend

Police: Missing girl was likely murdered by her father's friend