SEOUL, July 6 (Yonhap) -- A close associate of former President Lee Myung-bak was sentenced Friday to two years in prison, suspended for three years, by a Seoul court on corruption charges in connection with a scandal involving the ex-leader and his family.

The Seoul Central District Court handed down the guilty verdict for Lee Byung-mo, former executive secretary of the Cheonggye Foundation.

Lee was indicted on March 4 on charges of embezzlement, breach of trust and destruction of evidence. He was accused of disposing of ledgers that apparently had detailed records of the former president's financial accounts, possibly created under borrowed names, and their transactions.

Lee has been dubbed the ex-president's wealth manager, since he's known to have taken care of everything regarding the ex-leader's finances.

He was also suspected of creating a large secret fund using money from a subsidiary of DAS, an auto parts maker run by the ex-president's brother, and a subcontractor, and making the subsidiary provide illicit financial support to a firm run by the former president's son.

The scandal surrounding DAS, of which ex-President Lee has long been suspected of being the real owner, evolved this year with the launch of a fresh prosecution investigation into the corruption allegations.

The former president was arrested on March 22 and has been standing trial on a string of corruption charges that largely center on DAS. 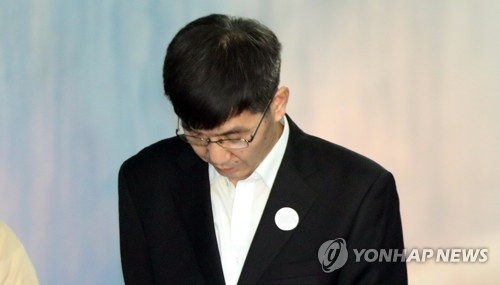