SEOUL, July 6 (Yonhap) -- The Vatican's top diplomat on Friday depicted ongoing diplomacy to promote peace on the Korean Peninsula as "very pertinent" while referring to his visit to the heavily fortified inter-Korean border the previous day.

During his talks with South Korean Foreign Minister Kang Kyung-wha, Archbishop Paul Richard Gallagher, the Vatican's secretary for relations with states, also said that Pope Francis will continue to support such efforts.

"So it was a little bit like that yesterday, making a relatively short journey of Panmunjom and then seeing the reality being introduced by the military there, both Korean and American, and to understand the very delicate situation that exists there, which makes the efforts to promote denuclearization, unification and peace on the peninsula very, very pertinent indeed," he said.

"Therefore, as you say, it confirms the Holy See, and I am sure when I refer these matters to the Holy Father that he will continue to support any efforts by all parties of good will to promoting peace on the peninsula and understanding both the North and South and also their respective international partners," he added.

On Thursday, Gallagher traveled to the Joint Security Area near the border, the world's last remaining vestige of the Cold War. There, he voiced optimism for ongoing diplomacy on the North, saying "many good things" will be achieved despite challenges down the road.

The South Korean minister expressed her appreciation for the pontiff's continued backing for peace efforts.

His visit to Korea came amid brisk diplomacy by Seoul and Washington to persuade Pyongyang to renounce its nuclear ambitions and work together to build a solid peace regime after years of the communist state's provocations.

At the invitation of the South Korean government, Gallagher arrived in Seoul on Wednesday for a six-day trip, including talks with President Moon Jae-in and other top officials. 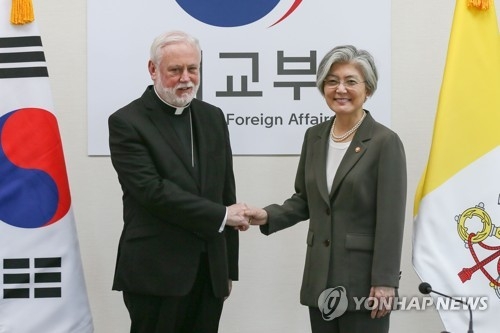