The Military Human Rights Center for Korea disclosed what it claimed was a DSC document drawn up in March last year to outline ways to impose wartime martial law in case the Constitutional Court rejected the National Assembly's impeachment of Park and kept her in office.

According to the civic group, the DSC suggested responding to candlelight protests by declaring garrison decree first in light of the negative connotations of martial law. If the situation deteriorated further, martial law should be considered, it said.

The DSC plans were not carried out as Park's impeachment was upheld, it said.

"The plan for armed crackdown on candlelight protests has been confirmed to be true," the group said. "This is clearly a self-coup d'etat plan and all involved in this are believed to have committed the crime of conspiracy to commit rebellion."

The martial law plan, which calls for seizing regions with tanks and armored vehicles and crackdowns on civilians with paratroopers, is similar to the military's bloody crackdown of the 1980 pro-democracy uprising in the southwestern city of Gwangju, the group said.

The group said that a two-star DSC general drew up the document.

The group said that it will file complaints with the prosecution calling for investigations of all related people, including Kim Kwan-jin, former chief of the presidential National Security Office, and former Defense Minister Han Min-koo.

Later, the Ministry of National Defense said that its prosecutors' office will look into the alleged plans to determine whether to initiate a formal probe.

"The ministry's prosecutors' office will look at how and when the plans were made, whether they were appropriate and related legal issues, and make a decision later on whether to launch a (formal) investigation," the ministry said in a text message to reporters. 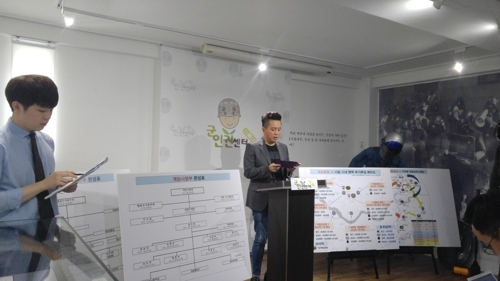