North Korean officials told South Korean reporters on a visit to Pyongyang to cover inter-Korean friendly basketball games that an invitation has already been sent to Beijing to ask for Xi's visit to the North to celebrate the Sept. 9 anniversary.

Asked if many important Chinese guests would visit Pyongyang for the Sept. 9 anniversary, a North Korean official said, "I think so."

Asked again if President Xi would come to Pyongyang, the official said, "He has to come because we have invited him." 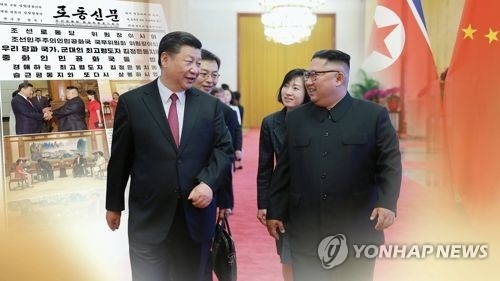 Analysts have long speculated about Xi's trip to North Korea this year, as North Korean leader Kim Jong-un has visited China three times -- in March, May and June.

The North Korean officials, meanwhile, abruptly suggested pulling U.S. forces out of the Korean Peninsula while referring to the deaths of two South Korean schoolgirls by U.S. tanks during a military exercise in 2002.

"Foreign troops should now disappear ... Tragic accidents, like the two schoolgirls' death, should not recur," another official said, without being asked by South Korean reporters about the issue.

They insisted that North Korean consumers don't like Chinese products anymore due to their poor quality.
(END)