SEOUL, July 6 (Yonhap) -- Director Kim Yong-hwa of last year's box-office smash "Along With the Gods: The Two Worlds" said Friday that he doesn't sleep well these days, anxious of how the film's sequel that he also directed will be received.

"I'm deeply moved because the film was loved more than expected," Kim said during a news conference to promote the sequel at a Seoul theater. "Actually, this puts a great deal of pressure on me. I'm nervous because the post-production process has yet to be finished. I'm making efforts to finish it in a better way." 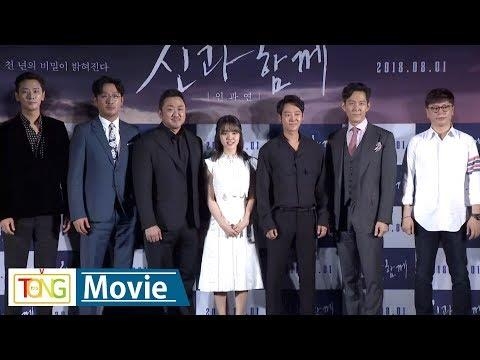 Released in December, the first installment of the two-part fantasy series was about a man who is judged in seven hells for 49 days after his death for rebirth as in the Buddhist view of the world.

Starring Ha Jung-woo, Ju Ji-hoon and Kim Hyang-gi as the three grim reapers, Gangrim, Haewonmaek and Deok-chun, who guide the dead people, it became the second most-viewed film of all time in South Korea with more than 14 million admissions. Actor Cha Tae-hyun played Kim Ja-hong, a righteous firefighter who is judged in the afterlife.

In the sequel titled "Along With the Gods: The Last 49 Days," the three grim reapers are about to gain new life as promised by the King of Hades if they succeed in reincarnating one more dead. But Gangrim, the leader of the three, chooses to bring Ja-hong's aspiring lawyer brother Su-hong (played by Kim Dong-wook), to the courtroom much to the disappointments of the two other colleagues. 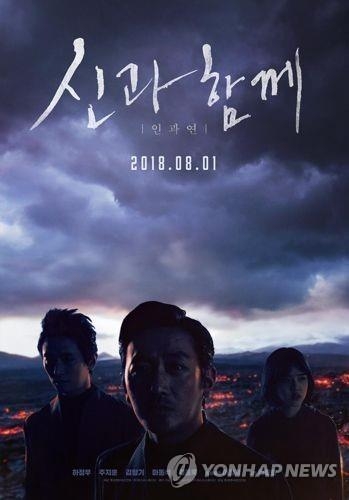 Although laws in the underworld ban reincarnating the restless dead, the king accepts Gangrim's suggestion on condition that the three gods fetch an old man, whom other grim reapers have repeatedly failed to bring in as he is guarded by the Seongju God (House Guardian God) in his home, and bring him back with them.

Haewonmaek and Deok-chun bump into the god when they go to take the old man, and the secret pasts of the three grim reapers, who were human beings before becoming gods, are disclosed one by one. Ma Dong-seok of "Train to Busan" and "Champion" plays the muscular but tender-hearted god.

"It has three stories -- the story of Gangrim who has to defend Su-hong for 49 days, the story of Haewonmaek and Deok-chun who have to bring back the old man from this life and the story of the Seongju God who knows the past of the three reapers, and they make one story altogether," the director said.

The two movies of the series were shot simultaneously for the first time in the country partly to save on the production cost.

"Actually, I shot the first film to make the second one," he said. "The series started from the idea that it's time to make a Korean-style franchise movie."

He attributed the success to the actors, "who did a really good job in delivering their emotions" even though they had to move between the two different stories while on the same filming set. "This is a work that I owe to the actors more than any other film that I have ever made," he stressed.

The Lotte Entertainment movie is set to open Aug. 1.