YEONGJONGDO, South Korea, July 7 (Yonhap) -- New U.S. Ambassador to South Korea Harry Harris on Saturday expressed his resolve to further cement Washington's alliance with Seoul, casting the security partnership as a "pillar of strength and stability" in the region and beyond.

The retired admiral issued a brief public statement after arriving here to fill the ambassadorial post that has been vacant since his predecessor, Mark Lippert, stepped down upon the inauguration of Donald Trump in January last year.

"President Trump and his administration have made clear strengthening even further America's alliance with Korea is one of our top priorities. Our presidents have been in regular contact as we work together to persuade North Korea to chart a new course," he told reporters.

"Over the past 65 years, the U.S.-ROK (Republic of Korea) alliance has served as a pillar of strength and stability throughout the Indo-Pacific region and beyond. America could not ask for a better friend, partner and ally than the ROK," he added. The ROK is South Korea's official name. 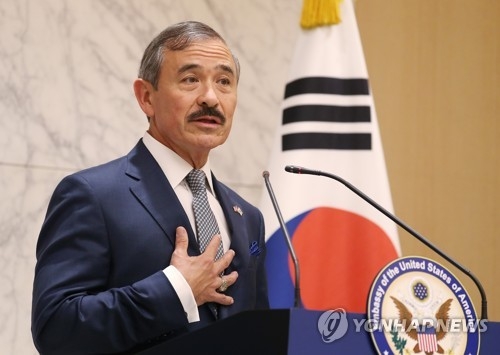 Asked about the tasks ahead of him as the U.S. ambassador, Harris said, "We, the embassy team, naturally works closely with Washington and our ally here in South Korea to work for the future of the relationship between our countries and the North."

In his statement, the top envoy touched on his father's influence on him and his wife Bruni Bradley, herself a career Naval officer. Harris' father served in the U.S. Navy and was a veteran of both World War II and the Korean War. He was stationed in Korea and Japan after World War II until he retired in 1958.

"My father fought in World War II and the Korean War, and he trained with Korean sailors at Jinhae. His visits and experiences have given Bruni and me the lasting friendships and deep appreciation of Korean culture and history," he said.

"They have also confirmed for us the shared values that formed the heart of the powerful relationship between our two nations: a commitment to democracy and the rule of law," he added.

His stint began at a time of brisk diplomacy by Seoul and Washington to persuade North Korea to end its nuclear and missile programs and work together to establish a solid peace regime on the divided peninsula.

A day earlier, the U.S. embassy said that his arrival would come "at a pivotal time" following last month's historic Singapore summit between Trump and North Korean leader Kim Jong-un as the allies push for the North's "final, fully verified denuclearization."

In February, Harris was tapped as the ambassador to Australia, another key U.S. ally. But Trump later switched him to South Korea, reportedly following a request from Secretary of State Mike Pompeo.

Victor Cha, former Asia affairs director on the U.S. National Security Council, was Trump's original choice for ambassador. But he was withdrawn from consideration amid reports of his policy dissonance with the Trump administration.

Harris is seen as a security hawk. He used to depict the North as "our most volatile and dangerous threat" and called on American allies to prepare for a "full range of military contingencies."

But he has backed the recent decision by Seoul and Washington to indefinitely suspend combined military exercises, noting the need for a "pause" to see Pyongyang's seriousness about dialogue on denuclearization.

For three years until May, Harris served as the head of the U.S. Pacific Command (USPACOM), which has recently been renamed the Indo-Pacific Command, an umbrella unit that oversees the 28,500-strong U.S. Forces Korea. He is the first Asian-American to hold four-star rank in the U.S. Navy and the first to head the USPACOM.

He graduated from the U.S. Naval Academy in 1978. He holds master's degrees from Harvard's Kennedy School of Government and Georgetown's School of Foreign Service. He also did post-graduate work at Oxford University.

Harris was born in Japan in 1956. His mother is Japanese.