The Ministry of Agriculture, Food and Rural Affairs said its joint government and civic research team found a tropical red ant queen, 16 larvae and some 560 worker ants at the site. On Friday, the authorities found some 70 red fire ants.

This is the first time that South Korea has discovered a tropical red ant queen.

"Through our investigation, these ants are believed to have come into this country this spring," the ministry said. "But considering colony size and no signs of male ants and princess ants, we believe this colony seems to be at an early stage of development." 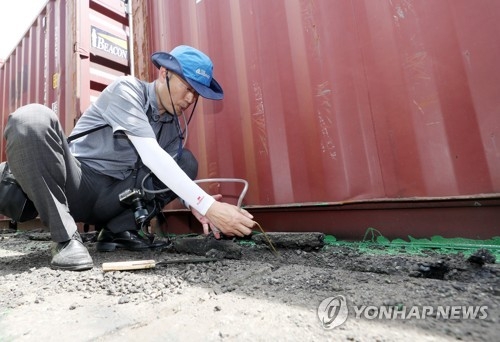 The ministry emphasized that, based on their inspections, there's isn't a big possibility of the red fire ants spreading, though further investigation needs to be completed.

This is the sixth time that tropical red ants have been found in South Korea since the first discovery of the species was reported last September.

With the discovery of a queen ant, which is the mother of other ants, South Korean authorities said they will strengthen quarantine efforts. The ministry said the government has deployed 122 inspectors to 12 local ports where containers from countries that are infested with fire ants are imported. They deployed additional workers to Incheon Port.

Red fire ants have a sting that can cause severe allergic reactions, including breathing problems that can lead to death in severe cases.

"With temperatures going up recently, it's making a good environment for red fire ants to inhabit," the ministry said.