According to the data compiled by market tracker FnGuide Inc., SK Telecom Co., the country's largest telecom network operator, is expected to report 366.2 billion won (US$305 million) in operating profit in the second quarter, down 13.5 percent on-year. Its sales are forecast to decrease 1.6 percent to 4.278 trillion won.

The operating profit of the third carrier and the smallest, LG Uplus Corp., is forecast to grow 3.7 percent to 215.7 billion won on 3.04 trillion won in sales, up 1 percent.

Analysts said the cut in SK Telecom's and KT's revenues is attributable to the increased number of users who signed up for monthly discounts of 25 percent.

Smartphone users here are allowed to choose between a one-off discount and the sharp monthly cut in rates. The government policy aims to provide more affordable telecom services for local households and ban mobile network operators from rolling out excessive discounts on devices to lure each other's clients.

The companies also adopted new International Financial Reporting Standards (IFRS) in the first quarter, which made various changes in how their earnings are calculated, including how marketing costs are reflected in the books. 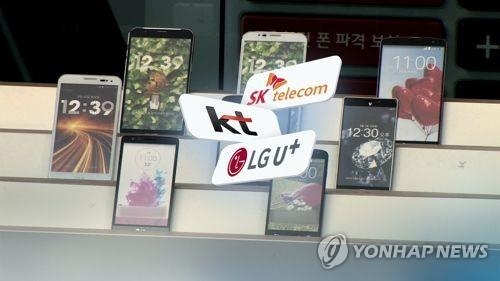