The Army had been moving to integrate its First and Third Command bodies to launch a single ground operation command by October under a five-year defense reinforcement scheme.

Defense Minister Song Young-moo, however, has recently ordered a reconsideration of the plan, the sources said.

"(The Army) initially pushed to launch the ground operation command on the Oct. 1 Armed Forces Day but is currently reviewing delaying it to early next year in consideration of the current (security) situation," one of the sources told Yonhap News Agency. "The final date of the launch can further be shifted," the source said.

The likely delay is in tandem with the growing rapprochement between South and North Korea, as well as the United States and the North, following North Korean Kim Jong-un's back-to-back summits with his South Korean, U.S. and Chinese counterparts in recent months.

The conciliatory mood opened up high-level military discussion between the two Koreas last month, where they restored the two militaries' communication lines that were severed for years. In continuing military talks, the two sides are likely to discuss further measures to allay military tension, including a withdrawal of North Korea's menacing long-range artillery forces along the border with the South.

Under the initial plan, the envisioned ground operation command was to take charge of subunits tasked with destroying North Korea's long-range artillery forces in the event of war.

If confirmed, it will be the fifth time the Army has delayed the launch of the ground operation command, having made the first delay from 2010 to 2012 due to a postponement in the transfer of the currently U.S.-controlled wartime operational command of South Korean armed forces. 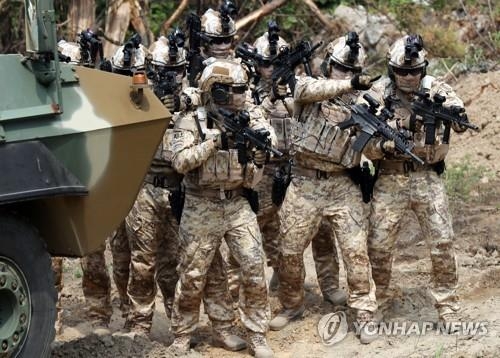