The North openly expressed disappointment over what he put forward during a hourslong bargaining with Kim Yong-chol, a top North Korean official, on Thursday and Friday.

Pompeo presented a "unilateral and gangster-like" demand for "complete, verifiable and irreversible" denuclearization (CVID), the North's foreign ministry said in a statement issued after his departure.

"If those requests were 'gangster-like' then the world is a gangster, because there was a unanimous decision at the U.N. Security Council about what needs to be achieved," the secretary said in the first U.S. response to the North's assertion that added to skepticism over future negotiations.

He was speaking at a joint press conference with his South Korean and Japanese counterparts -- Kang Kyung-wha and Taro Kono -- in Tokyo. 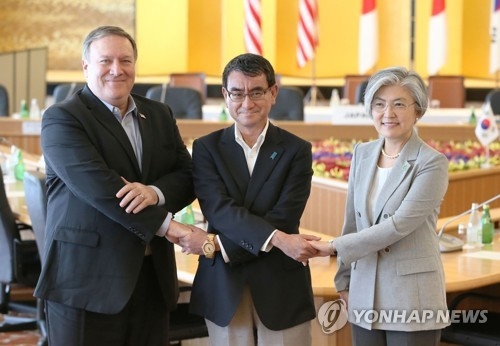 He briefed them on the outcome of his first visit to the North since the Singapore summit between President Donald Trump and the North's leader Kim Jong-un on June 12.

The regional powers agreed to keep sanctions against North Korea until its full denuclearization based on thorough verification, which is a shared goal.

They also reaffirmed their unity in taking the next steps on the communist nation.

Pompeo said there was progress made in his talks in Pyongyang, calling them "productive," but admitted that there's work to be done on a much-awaited timeline for denuclearization.

"Sanctions will remain in place until final, fully verified denuclearization," Pompeo stressed. "While we are encouraged by the progress of these talks, progress alone does not justify the relaxation of the existing sanctions regime."

On the trustworthiness issue, he said, "There will be a verification connected to the complete denuclearization."

It's what the leaders of the two sides agreed to in their Singapore summit, he said but gave no specifics.

"(We) agreed to maintain the U.N. Security Council sanctions until North Korea's complete denuclearization," she said.

On her government's decision to suspend major combined military drills with the U.S., she said it's aimed at facilitating the denuclearization process.

It has not changed the alliance at all, and Seoul will continue to coordinate closely with Washington and Tokyo, she emphasized.

The Japanese top diplomat thanked Pompeo for raising the issue of Japanese nationals abducted to the North decades ago in his meeting with North Koreans.

Pompeo has served as the Trump administration's point man on the North in recent months.

His third visit there drew global attention as a potential watershed in the implementation of the Singapore accord.

Apparently, it produced no tangible results, despite high expectations, such as a denuclearization timetable and the agreed-upon repatriation of the remains of American service members killed in the 1950-53 Korean War.

Pompeo had no meeting with the North's leader unlike his previous two visits there. He argued it was not in his itinerary.

The lack of a major agreement at his latest talks represented a gap between the two sides on details of denuclearization and incentives.

It's also a reminder of difficulties in negotiating with the North, which has a track record of dragging its feet in nuclear talks seen as part of a strategy to buy time for the development of weapons.

A silver lining is that Pyongyang and Washington plan to continue discussions on a lower level. Pentagon officials are scheduled to meet North Koreans at the inter-Korean truce village of Panmunjom later this week.