SEOUL, July 8 (Yonhap) -- Samsung Electronics Vice Chairman Lee Jae-yong departed for India to attend the opening ceremony of its new production line Sunday, where he is expected to meet President Moon Jae-in for the first time as well.

"Vice Chairman Lee departed for India from Gimpo International Airport for a business trip on Sunday," a corporate official said. "There's no other schedule for him besides attending the opening ceremony of the Noida production line. His return date has not been decided."

Moon will also attend the ceremony during his first visit to India since he took office in May 2017.

It marks the first time for Lee to attend a public event after being released from detention in February, after serving nearly a year behind bars on his alleged ties to the corruption scandal that led to the impeachment of former President Park Geun-hye.

Lee had three other overseas business trips earlier this year, but he did not attend any opening events.

The heir of South Korea's top conglomerate declined to respond to journalists on Sunday at the airport.

"Although (the performance) in the Indian smartphone market recently decreased, it will only be temporary," Koh said. "We are working hard, and it will get better in the future." 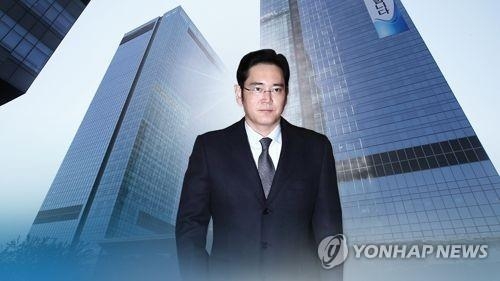