GUNSAN, South Korea, July 8 (Yonhap) -- Four out of five crewmen were rescued after a fishing boat carrying them capsized following a collision with a tugboat in waters off the southwestern coast on Sunday, the Coast Guard said. The boat's captain remains missing.

The accident happened at 7:13 p.m. in waters southeast of an island near Gunsan, North Jeolla Province, about 274 km southwest of Seoul, when the 7.3-ton shrimp boat hit a 99-ton tugboat and overturned.

Convinced that the missing crewmen were trapped inside the boat, the Coast Guard rapped on the hull to find out if they could get any response, and they did, the officials said.

Four fishermen were rescued from the boat. But the 56-year-old captain surnamed Kwon is missing, and the search to find him is continuing, the Coast Guard said. None of the crew members were of foreign nationality, it added.

The captain of the tugboat told the Coast Guard that his boat was hauling a barge and that Kwon's boat may have been caught in the ropes. He said he didn't see anyone in the water after the boat capsized.

The Coast Guard dispatched nine patrol ships, one rescue helicopter and 25 rescue staff to the site to find the fishermen. But foggy weather and searching at night have been obstacles, the authorities said. 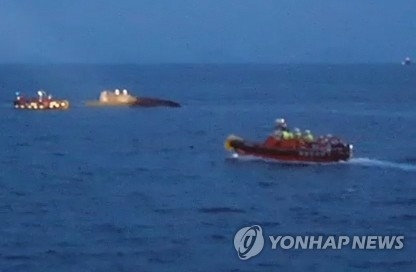