Asiana staff denounced Park and his executives for massive in-flight meal service disruptions that led over 100 of its flights to take off without food for passengers for most of last week. The fiasco resulted in the suicide of the head of a supplier to Asian's new caterer that failed to produce food on time.

A woman, who claimed to be a relative of the man who took his own life, made a speech at the rally calling for "actions to find out the exact reasons" for her uncle's death.

"I don't believe family or colleagues caused this to happen," she said. "Why he had to die -- the truth must be uncovered and things need to be set right."

Protesters from the rival airline Korean Air joined the demonstration, the second rally by Asiana employees following a candlelight vigil on Friday.

Korean Air employees already held two rallies of their own in early May, at which they denounced the founding Cho family for years of habitual bullying and assaults on employees and others that have led to prosecution investigations.

Sunday's joint rally was to voice their united call for measures to prevent such managerial errors and misconduct from happening again and also to call on their chiefs to take full legal and ethical responsibility, they said.

Protesters marched toward the headquarters of Kumho Asiana, located in Gwanghwamun, where they planned to wrap up the rally. 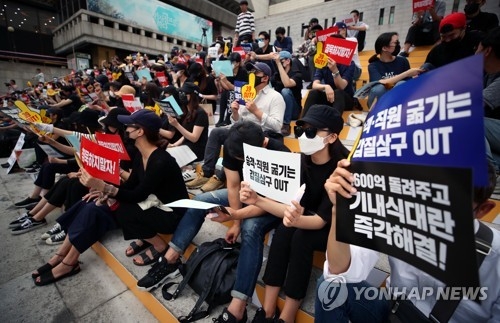