"The visit to India and Singapore by the head of state marks a move toward launching the New Southern Policy in earnest," Kim Hyun-chong told reporters, referring to Moon's key foreign policy that seeks to greatly enhance the country's relationship with India and 10 members of the Association of Southeast Asian Nations (ASEAN).

Moon arrived here Sunday for a four-day state visit. He is currently on a two-nation trip that will later take him to Singapore, an ASEAN member.

"As you may well know, the Moon Jae-in government is building a cooperative relationship with India and ASEAN, which are thought to be the next China, while upgrading the country's relationship with India and ASEAN countries to the level of its ties with the four super powers," Kim said. The four super powers refer to the United States, China, Japan and Russia. 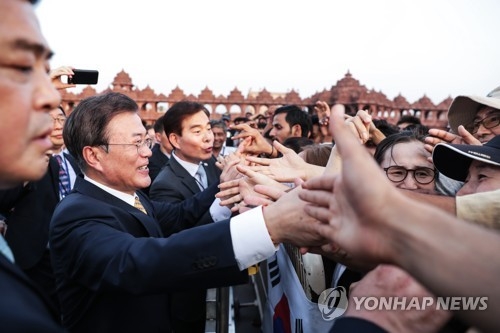 The move to enhance South Korea's economic and trade relations with the Asian countries comes after its diplomatic row with China over the deployment of the THAAD U.S. missile defense system in South Korea.

The move led to a series of apparent economic retaliations from China, the world's single largest importer of South Korean goods, which inevitably left a crippling dent on the South Korean economy, from which many South Koreans believe the country has yet to fully recover.

"Now we need a turning point in our economic cooperation with India and ASEAN countries," Kim said.

To this end, Seoul will seek to help build and improve shipping and distribution networks in the Southeast Asian economies.

"Though we may have opened the doors to the markets with the South Korea-ASEAN free trade agreement (FTA) and South Korea-India Comprehensive Economic Partnership Agreement (CEPA), there may be difficulties in supplying our companies' products unless there is an adequate distribution network in those markets," he said.

Also, the government will seek to promote investment between South Korea and the Asian countries.

"Although we had pushed for a cooperation strategy with the Southeast Asian countries as a single package, I believe we now need to push for a strategy that fits all countries and separate strategies that fit the characteristic of each different country," he said.

For instance, South Korea will work to expand the market presence of its carmakers in Indonesia, the largest car market in Southeast Asia, where Japanese vehicles currently take up 98.6 percent of the market, while South Korean cars take up only about 0.1 percent, according to Kim.

India, on the other hand, may hold the greatest potential for South Korea and have the least risk.

"India is a country that has no sensitive issues with us historically or geopolitically, so has little risk of its economic cooperation wavering due to external factors. China, for example, created serious problems for our country over the THAAD issue, but with India, there are no such variables," the trade minister said.

Kim also noted India will continue to grow in its sheer size with its population expected to reach over 1.5 billion in 2030, becoming the world's single largest market.

Already, South Korea and India have held five rounds of negotiations to expand their bilateral free trade pact, CEPA, which went into effect at the start of 2010.

The South Korean president is set to hold a bilateral summit with Indian Prime Minister Narendra Modi on Tuesday, followed by a meeting with Indian President Ram Nath Kovind and a state dinner to be hosted by his Indian counterpart.

He will head to Singapore on Wednesday for a summit with the country's Prime Minister Lee Hsien Loong.

Moon's trip seeks to turn India into 'next China' for S. Korea: official

Moon's trip seeks to turn India into 'next China' for S. Korea: official