In his final at-bat against the Detroit Tigers, Choo hit an infield single off reliever Victor Alcantara in the ninth inning in the Rangers' 3-0 win at Comerica Park in Detroit on Sunday (local time) to set a franchise record.

With the latest performance, Choo broke a tie with Julio Franco, who reached base in 46 consecutive games in 1993.

Choo reached the historic mark miraculously. He was 0-for-4 leading up to the at-bat, and he came to the plate with two outs in the top of the ninth inning. He earned his fifth at-bat as his teammate Ronald Guzman singled in front of him with one out.

After Carlos Tocci struck out, Choo hit a grounder to Jeimer Candelario, but as the Tigers' third baseman didn't attempt a throw, the 35-year-old South Korean was able to reach first base.

Choo has been on base in every game since May 13. It's the longest active streak in Major League Baseball (MLB) and also the longest of Choo's career.

Choo has a .339 batting average and a .470 on-base percentage during the stretch.

Among active players, Joey Votto of the Cincinnati Reds and Albert Pujols own the record with a 48-game streak. Choo can now go for their records and can chase the Rangers' franchise on-base record of 58 games set by Will Clark over the 1995 and 1996 seasons.

The major league record is held by Ted Williams, who reached base in 84 consecutive games in 1949. 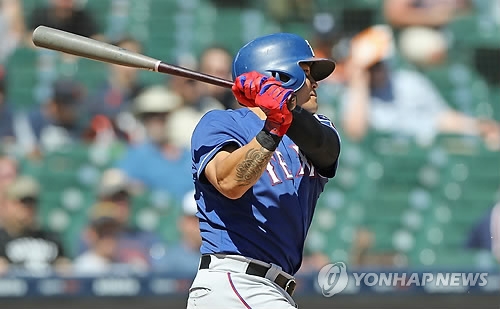