WASHINGTON, July 8 (Yonhap) -- An influential U.S. senator on Sunday accused China of pulling North Korea back from negotiations with the United States in order to gain leverage in a U.S.-China trade dispute.

Sen. Lindsey Graham (R-SC), who serves on the Armed Services Committee, was commenting on North Korea's angry reaction to what it said was U.S. Secretary of State Mike Pompeo's "unilateral and gangster-like" demand for complete denuclearization.

"I see China's hands all over this. We are in a fight with China," Graham said in an interview with Fox News. "There's no doubt in my mind that it's the Chinese pulling the North Koreans back."

China -- North Korea's only major ally and trading partner -- is seen as critical in efforts to get North Korea to dismantle its nuclear weapons and ballistic missile programs. 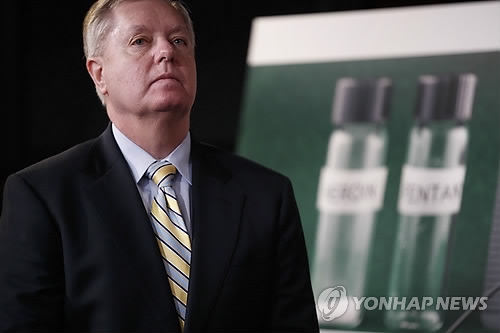 North Korean leader Kim Jong-un has had three meetings with Chinese President Xi Jinping in recent months to apparently coordinate their strategies for denuclearization negotiations between Washington and Pyongyang.

The North Korean statement came in response to Pompeo's visit to Pyongyang this weekend, during which he sought to flesh out last month's summit agreement between U.S. President Donald Trump and Kim.

At the summit, Kim committed to work toward the "complete" denuclearization of the Korean Peninsula in exchange for security guarantees from the U.S.

"If I were President Trump, I would not let China use North Korea to back me off of the trade dispute," Graham said. "We've got more bullets than they do when it comes to trade. We buy US$500 billion worth of goods from the Chinese. They buy $100 billion from us. They cheat, and President Trump wants to change the economic relationship with China."

In a veiled threat to the North Koreans, he added: "And to our North Korean friends -- can't say the word 'friend' yet -- you asked Pompeo, did he sleep well? If you knew what I knew about what we could do to the leadership of North Korea, you wouldn't sleep very well."