Moon, who is visiting India as part of his two-nation Asia tour, is scheduled to make a trip to Singapore from Wednesday to Friday, during which he plans to hold a summit with Prime Minister Lee Hsien Loong.

Moon will be accompanied by a large-scale delegation composed of heads and high-ranking officials of 72 conglomerates and smaller companies, as well as chiefs of business bodies, according to the Korea Trade-Investment Promotion Agency (KOTRA).

Also on the list are the head of the Korea Federation of Small and Medium Business, the KOTRA president, the president of the Export-Import Bank of Korea and the chief of Korea Investment Corp.

The South Korean business delegation is slated to attend a Korea-Singapore business forum in the city-state on Thursday to discuss ways to promote bilateral cooperation. 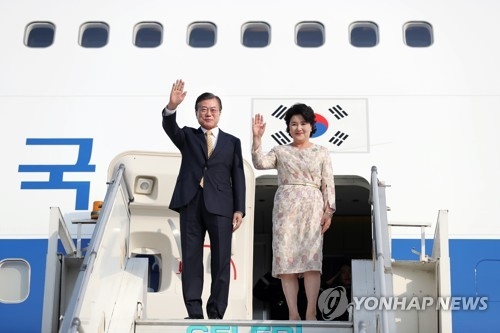 Large biz delegation to join Moon on his trip to Singapore

Large biz delegation to join Moon on his trip to Singapore