"Before the game, [manager] Jeff Banister called a team meeting and called out my name as an All-Star," Choo was quoted by saying to MLB.com. "When I came from Korea to play in the big leagues, my goal was to be one of the best players. This is one of the best days of my life. I am going to enjoy this with my family."

Choo, who made his big league debut in 2005 with the Seattle Mariners, is now the third South Korean to appear at the MLB All-Star Game, following pitchers Park Chan-ho in 2001 and Kim Byung-hyun in 2002. He is the first position player to earn All-Star selection.

"I know Korean pitchers have made the All-Star Game, but first position player -- very special for me and my country and my family, too," he said. "I am very excited. I can't wait."

Choo, 35, on Sunday set a Rangers' single-season record by reaching base in 47 consecutive games. During that streak, Choo has hit .339 with a .464 on-base percentage and a .600 slugging percentage.

"I was wishing before the end of my career that I would make an All-Star Game," he said. "It's not easy to do. A lot of good players on 30 teams."

This year's MLB All-Star Game will be staged in Washington D.C. on July 17. 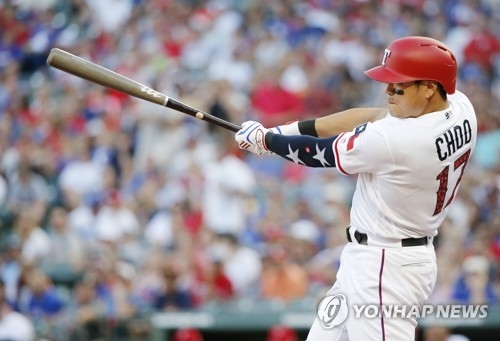