SEJONG, July 9 (Yonhap) -- The growth of consumer prices in South Korea is expected to accelerate in the second half of the year, mainly due to a rise in global oil prices, the country's deputy finance minister said Monday.

"The government will take preemptive measures (to stem a possible rise in consumer prices) and try to stabilize prices of daily necessities in particular," Deputy Finance Minister Ko Hyung-kwon said in a policy review meeting.

The government says inflation in Asia's fourth-largest economy will remain relatively stable, although inflationary pressure could rise in the face of rising crude prices.

In particular, prices of agricultural products and public services are expected to rise during the second half of the year, he said.

South Korea's consumer price growth continued to stay above 1 percent in June on a rise in agricultural goods and the service sector.

The country's consumer price index climbed 1.5 percent last month from a year earlier, the same pace from the previous month's 1.5 percent on-year gain, according to the data compiled by Statistics Korea.

The June figure is well below the Bank of Korea's target of 2 percent for the year, stoking speculation that the central bank's monetary tightening may be pushed forward at a gradual pace in the coming months. 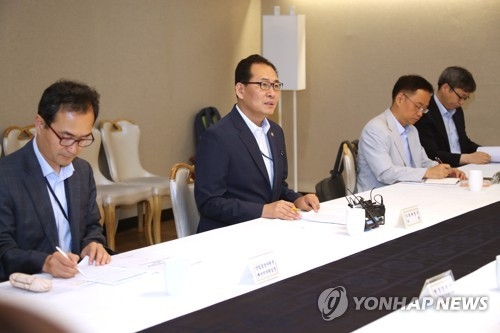 Inflationary pressure to build up in 2nd half

Inflationary pressure to build up in 2nd half