SEOUL, July 9 (Yonhap) -- A majority of South Koreans are in favor of overhauling the National Assembly's "special activity fund" doled out to lawmakers every month like a salary, a survey showed Monday, amid criticism that the fund is a waste of taxpayer money and is spent without any oversight.

The criticism rose sharply after a local civic group disclosed data last week showing that the National Assembly provided ranking lawmakers, including major party leaders and parliamentary committee chairs, with up to 60 million won (US$53,641) every month in the name of special activity funds.

But the money has been spent without any oversight or control because no receipts need to be turned in to prove it was properly used. Critics said the funds have been spent like a second salary for lawmakers, are a waste of taxpayer money and must be scrapped.

Realmeter conducted a survey of 500 adults on the issue on Friday, and 52.8 percent of them said they believe the system should be overhauled to improve transparency while 42.3 percent expressed support for abolishing the funds altogether.

Only 2.1 percent responded the fund should be left as it is now.

Amid such criticism, ruling and opposition parties have pledged to push for measures to improve transparency in the use of special activity funds. 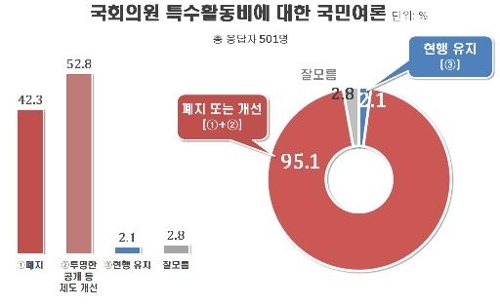 The survey also showed that President Moon Jae-in's approval rating fell for the third consecutive week to 69.4 percent, down 2.2 percentage points from a week earlier.

The agency attributed the drop to persisting concerns about the economic situation as well as negative foreign news reports about North Korea's commitment to denuclearization.

The ruling Democratic Party also saw its approval rating fall for the third consecutive week to 47.5 percent. Still, the party is far ahead of the runner-up main opposition Liberty Korea Party that logged an approval rating of 18.3 percent.
(END)