The Ministry of Agriculture, Food and Rural Affairs said a joint investigation team found about 70 red fire ants inside the container terminal of Incheon Port, west of Seoul, on Saturday.

A total of 776 red fire ants, including a queen and 670 worker ants, were discovered at the site on Friday. It was the first time that the tropical ants were spotted in the country.

"We have found 70 more worker ants, located about 80 meters from the initial spot of discovery," the ministry said in a release. "We are conducting genetic analysis to figure our their species and place of origin."

South Korea has stepped up quarantine efforts against foreign red fire ants after the highly invasive species were first discovered in Pyeongtaek, south of Seoul, on June 18. Two days later, about 3,000 ants, as well as 11 colonies, were found on the floor of a container at Busan port, the country's largest seaport, raising alarms among quarantine and port authorities.

Quarantine officials have sterilized the site and set ant traps in the ports to help contain the insects from spreading in the country.

Red fire ants have a sting that can cause severe allergic reactions, including breathing problems, and in severe cases can lead to death.

In September 2017, about 1,000 red fire ants and their colony were detected in Busan, causing fears that South Korea may no longer be a safe zone from the aggressive species. The ants are found in countries around the world, such as the United States, Australia and China. 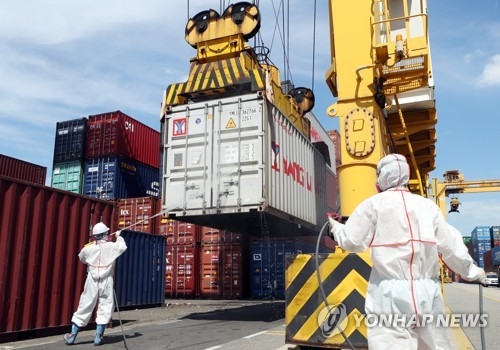