SEJONG, July 9 (Yonhap) -- South Korea's chief economic policymaker said Monday that innovation is one of the important values sought after in many industries and stressed that positive changes from such innovation should be shared with many people.

Seoul's Finance Minister Kim Dong-yeon made the remarks in a keynote speech at INNOPROM-2018, the major industrial trade fair which runs in Ekaterinburg, Russia, from Monday to Thursday, according to the finance ministry.

The industrial trade fair has been held annually in Ekaterinburg since 2010.

This year, over 50,000 businessmen and government officials from 95 countries are expected to participate in the event. 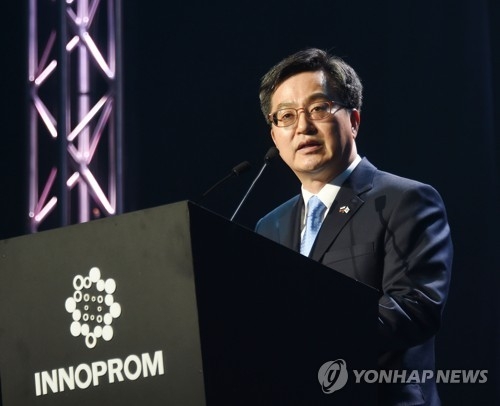 South Korea was selected as the partner country for this year's event, exhibiting innovative technologies and products of industry leaders and cultural programs and hosting business forums.

Over 100 South Korean companies, such as Doosan Infracore Co. and Hyundai Motor Co., showcased their cutting-edge technologies and products at the trade show, with their sectors ranging from mechanical engineering and robotics to automaking and power generation.

Their participation comes as South Korea and Russia have been seeking ways to expand bilateral business ties on various fronts, including energy, shipbuilding, transportation and fisheries.